EMBRACE is a four year project funded under Framework Programme 7 (FP7) of the European Union. The consortium is made up of 19 partners from across Europe and brings together the leading Earth System Models (ESMs) in Europe with the goal of developing a variety of model improvements leading to more reliable projections of the future climate.

Despite the great advances made over the last few decades, Earth System Models (ESMs) remain very simplified representations of the real earth system. Indeed a number of vital processes of the climate system are missing altogether. This results in ESMs having a reduced ability to provide reliable projections of the future climate change.

EMBRACE aims to address these limitations with a particular focus on areas that are most uncertain or unrealistic in present-day projections. The key goals are :

Four primary ESM biases specifically being targeted by the project are :

The ESMs will also be used to investigate the risk of abrupt changes to potential tipping points in the climate system, such as the stability of the Atlantic Ocean circulation and the stability of tropical and boreal forest ecosystems to global warming.

CNRM-GAME co-leads the WP1 on « Atmospheric convection and coupled tropical circulation ». Its main contribution concerns tropical convection processes and land-surface coupling, by bringing its expertise in this area ; i.e. LES and CRM simulations to assess and improve parameterisations, and data and case studies from the AMMA project. CNRM also contributes to improve the representation of intraseasonal variability by using aquaplanet experiments. During the last year of the project, CNRM-GAME will also evaluate its ESM and its SCMs set improved in the frame of EMBRACE.

Structure of the Project

In order to achieve the aims and objectives of the EMBRACE project the work is broken into six Work Packages (WPs). Although each WP has defined goals and objectives there is a great degree of interaction between them all (see diagram below). 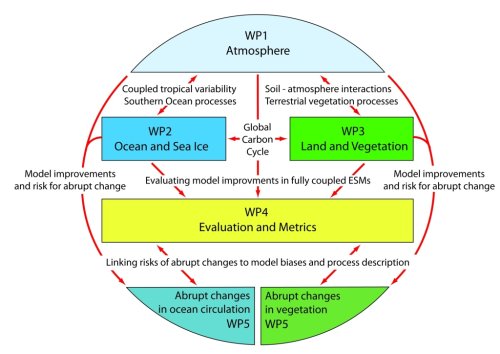 Illustration of a few results

Illustration 1 : "Diurnal cycle of convection over the Sahel" by Fleur Couvreux

A case of daytime development of deep convection over tropical semi-arid land has been used to evaluate the representation of convection by global and regional models in this unexplored environment. The case is based on observations collected during the AMMA field campaign. Different types of models, run with the exact same initial and boundary conditions, are intercompared : Single Column Model (SCM) versions of four different Earth System Models which participated to the CMIP5 exercise, and for which new physical packages are also tested, the SCM version of the ECMWF operational forecast model, the SCM version of a mesoscale model as well as a bulk model and a large-eddy simulation (LES), which serves as a reference. The LES correctly reproduces the observed growth of the boundary layer, the long-duration development of shallow clouds, the initiation of deep convection and the development of cold pools. Here, it is used to evaluate the representation of the diurnal cycle of convection by the models and to test the hypotheses underlying the convective parametrizations. This case includes two distinct transition phases, namely from clear sky to shallow cumulus and from cumulus to deep convection. Most SCMs have difficulties with the representation of the timing of convective initiation and the rain intensity, even though substantial parametrization improvements have been achieved. They also fail in representing the mid-level troposphere moistening during the shallow convection phase, which is further analysed by switching off the deep convection schemes to focus on the pre-conditioning of deep convection by shallow convection schemes. Qualitatively, beyond differences in timing of deep convection, the SCM models reproduce the sensitivity to initial and boundary conditions observed in the LES.

This work has been recently submitted to QJRMS (Couvreux et al. 2014). Figure below illustrates the difficulties of SCMs in representing the mid-level troposphere moistening during the shallow convection phase. 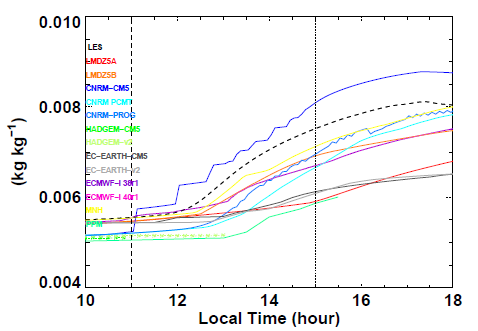 Figure 1: Time evolution of the water vapour mixing ratio averaged in-between 2000 and 5000m for simulation without deep convection scheme ; For the models for which those simulations are not available (HADGEM-CM5, HADGEM-v2 and PPM) information is dran up to the time of initiation of deep convection. The LES simulation is in black dashed line and the REF simulations in colors.

This task tackles the problem of the interaction between dynamics and moist physics in a simplified setting based on parameterizing the large-scale circulation in single-column models (SCM) and comparing the results to cloud-resolving model (CRM) Méso-NH simulations using the same parameterization of the large-scale circulation. In 2011, the WCRP Global Atmosphere System Study (GASS) program launched a very similar initiative aiming to intercompare models and methodologies. The EMBRACE participants decided to join forces with the GASS initiative and participated actively to the definition of the specifications of the GASS experiments. Two methodologies were chosen to represent the large-scale vertical motion in SCMs and CRMs. One is based on the empirical approximation that horizontal gradients of temperature can be neglected in the tropical free troposphere (the Weak Temperature Gradient or WTG approximation) ; the other is based on a simplified equation of momentum (the Damped Gravity Wave or DGW approximations). A first series of experiment evaluates how the condensation and mixing processes are represented in SCMs with fixed radiation (see specifications in the appendix) for different underlying sea-surface temperature (SST), and a second series will evaluate the complete parameterization packages (including interactive radiation). Both series of simulations are long enough to reach equilibrium. By varying the underlying SST, the series of simulations can reproduce different regimes observed in the tropical atmosphere : subsiding for low SSTs, close-to-neutral, and ascending for warm SSTs. By using different initial conditions, the series of experiments also investigate the possibility of multiple equilibria. The contribution of EMBRACE participants includes performing the experiments with one CRM (MesoNH), and the CMIP5-version and a more recent version of the EC-Earth, IPSL, and CNRM SCMs, as well as the coordination of the interactive-radiation series of experiments. The first series of simulations has been completed with most of the models and the analysis is still under way. Preliminary results show that the framework permits to reveal some of the model biases. Both methodologies (WTG and DGW) yield similar results except that the WTG approximation yields vertical profiles of vertical motion with smaller-scale features, and this suggest that the approach is fairly robust to the choices of parameterization for the large-scale dynamics. Some of the models such as the LMDz-B model (from the IPSL-B ESM) yield an equilibria that are similar to the equilibrium reached by the CRM, others differ very significantly (e.g., CNRM-v5, that simulated an intermediary regime with low-level ascent and high-altitude descent for all SSTs instead of a transition from subsiding to ascending regime). In general the more recent versions of models behave more similarly to the CRM than previous versions, which indicates a progress in the parameterizations. Even in the most recent versions of the SCMs, there are still very significant biases in terms of parameterized vertical motion (Figure 2), humidity stratification and cloudiness for all models. Biases in the vertical profiles of vertical motion results from biases in the diabatic terms (convective heating in the case of the convective regimes, radiative cooling in the case of the subsiding regime), and in the thermal stratification. Biases in the cloudiness reveal biases in the cloud schemes ; in particular, high-altitude cirrus clouds in the case of subsiding regimes in some SCMs (LMDz-A and B) suggest a poor representation of the large-scale condensation. 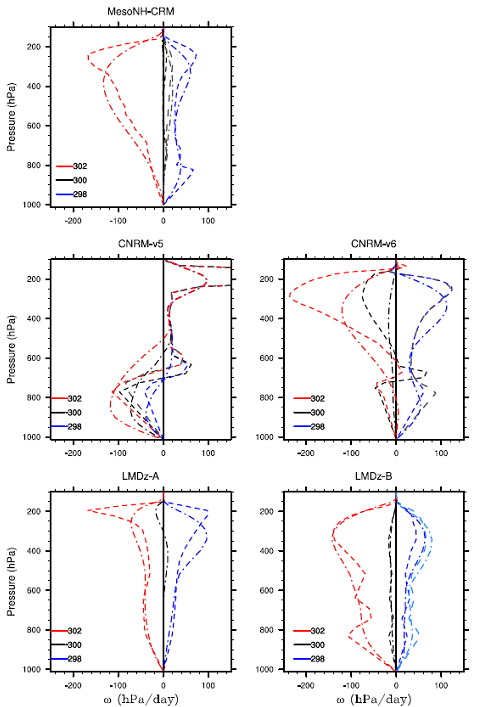 Figure 2 : Profiles of pressure velocity in WTG equilibrium (dashed lines) and DGW equilibrium (dashed-dotted lines), for SST =298 K (blue lines), SST = 300 K (black lines), and SST = 302 K (red lines). The RCE zero velocity profiles for SST = 300 K is plotted by a black solid line. In case of multiple equilibria, the second equilibrium is plotted in a lighter colour. Upper left figure is for reference 3D runs provided by the CRM Méso-NH, the second row is for the old v5 and new v6 SCM versions of the CNRM model, while the last row is for the old A and new B SCM versions of LMDz model.

It includes the following 19 partners :