CNRM-CM5 is an Earth system model designed to run climate simulations. It consists of several existing models designed independently and coupled through the OASIS software developed at CERFACS.

SURFEX for land (ISBA scheme) and the ocean-atmospheric fluxes

TRIP to simulate river routing and water discharge from rivers to the ocean (initially developed at Tokyo University).

CNRM-CM5 is jointly developed and used by CNRM-GAME and CERFACS. 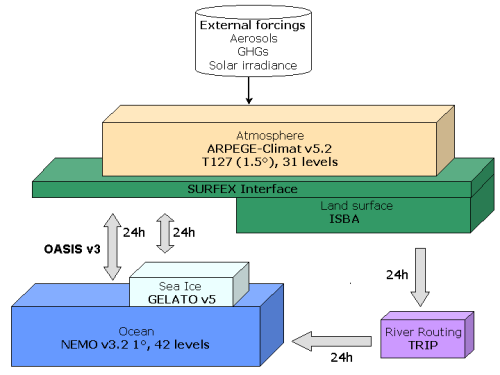 CNRM-CM5 is able to simulate present climate and its variability on timescales ranging from months to centuries. In particular, this model is used to perform experiments in the framework of the Coupled Model Intercomparison Project (CMIP5), which will serve as a base of the next IPCC assessment report. The CNRM-GAME CMIP5 data portal is the entry point to the model output generated by CNRM-CM5 within this international project. CNRM-CM5 is a fundamental tool

to improve our understanding of the climate system

to simulate future climate depending on greenhouse gases scenarios 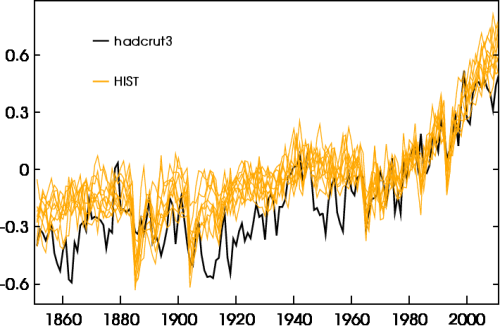 The figure above represents the global mean near surface air temperature simulated by CNRM-CM5 (orange curves) over 1850-2010. The black curve represents HadCRUT3 observations. In both cases, temperature anomalies relative to 1961-1990 were plotted. Ten simulations were performed with CNRM-CM5, in order to assess the internal variability of climate, since the simulated climate varies slightly from one simulation to another. All these simulations include the changes in atmospheric greenhouse gases and aerosols. Unlike greenhouse gases, atmospheric aerosols, which are small particles, have a cooling impact on climate. The variations in solar irradiance were also taken into account in CNRM-CM5. These variations, namely the 11-year solar cycle, cause variations in global mean surface temperature of the order of about 0.1°C. Finally, the impact of major volcanic eruptions was included, since each of them has a significant cooling effect (several tenths of °C). This effect can be seen in our simulations in 1883 (Krakatoa), 1902 (Santa Maria), 1964 (Agung), 1982 (El Chichon) and 1991 (Pinatubo). It is also obvious in observations, even if it is probably much underestimated in the case of the Krakatoa eruption. Finally, the observed general warming trend over 1850-2010 is rather well reproduced by the model.