Crocus is a unidimensional thermodynamic-based computer model able to simulate the energy and mass balance of the snowpack. Its main purpose is to accurately describe the time evolution of the physical properties of the inner snowpack (thermal conduction, radiative transfer) based on a semi-quantitative description of the time evolution of the morphological properties of the snow grains along with snow metamorphism. This approach allows to realistically simulate energy and water fluxes at the snowpack interfaces (ground and atmosphere).

In its basic configuration, Crocus recquires the following forcing variables at a hourly time step:

The basal heat flux can either be imposed (simulations in Alpine settings) or result from the coupling with a soil physical model. 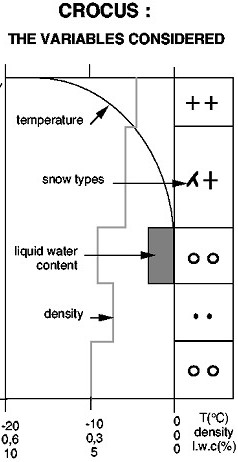 Snow layers are described through the following variables

The snow type is described semi-quantitatively using notions such as the dendricity, sphericity, grain size and the physical history of the snow layer.

The uniqueness of Crocus arises from its interactive management of the number of horizontal layers (referred to as “virtual snow layers”) allowing to optimally discretize the vertical profile of the physical properties of the snowpack. Indeed, when fresh snow deposits at the surface of the snowpack, its physical properties can widely differ from the underlying older snow. In addition, snow metamorphism drives the time evolution of the physical properties of snow layers in potentially widely different directions. Neverthless, to avoid having to deal with a very large number of virtual snow layers which would impair the model performance, two virtual layers possessing neighbooring physical properties can be aggregated into a single virtual layer. In contrast, a given virtual snow layer can be spit up whenever it is too close from the snow surface: this allows a more accurate description of heat and radiation transfer in the uppermost snowpack, thus a better simulation of the temperatur profile.

Below the main physical laws implemented in Crocus

Physical variables implemented into the physical laws described above are often parameterized as a function of the prognotics variables. A few examples are given below:

The Crocus model was originally described in two publications :

The current version of Crocus is now integrated as a snow scheme of the lans surface model ISBA within the SURFEX interface. The following reference provides details on this implementation :