SURFEX (Surface Externalisée) is the surface modelling platform developed by Meteo-France (more info here), result of the externalization of surface physical parameterizations, preparation of specific surface parameters needed by these physical schemes as well as the initialization of their state variables. SURFEX, which gathers all the developments and improvements made in surface schemes in order to make them available for as many people as possible is designed to be coupled with atmospheric and hydrological models. It contains independent models like the ISBA land surface model and its carbon options, TEB for urban areas, and FLake for lakes.

During a model time step of the surface-atmosphere coupled model, the upper air temperature, specific humidity, horizontal wind components, pressure, total precipitation, long-wave radiation, short-wave direct and diffuse radiations and possibly concentrations of chemical species and dust are imposed to each surface grid box. In return, Surfex computes averaged fluxes for momentum, sensible and latent heat and possibly chemical species and dust fluxes and then sends these quantities back to the atmosphere with the addition of a radiative surface temperature, surface direct and diffuse albedo and also surface emissivity. All this information is then used as lower boundary conditions for the atmospheric radiation and turbulent schemes of the atmospheric model : 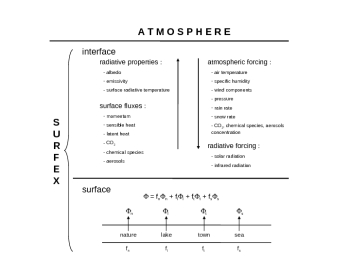 In Surfex, each model grid box is represented by four surface types : sea or ocean, water bodies (lakes, ...), urban areas and nature (soil and vegetation). The coverage of each of these surfaces is obtained with the global ECOCLIMAP database (Masson et al. 2003), which combines land cover maps and satellite information. Each surface type is modelled with a specific surface model and the total flux of the grid box results from the addition of the individual fluxes weighted by their respective fraction.

The ISBA scheme (more details here) computes the exchanges of energy and water between the continuum soil-vegetation-snow and the atmosphere above. In its initial version, the evapotranspiration of the vegetation is controlled by a resistance like proposed by Jarvis (1976). The ISBA-A-gs model (Calvet 1998) accounts for a simplified photosynthesis model where the evaporation is controlled by the aperture of the stomata, the component of the leaves that regulates the balance between the transpiration and the assimilation of CO2.

The TEB model (more details here) is based on the canyon concept (Oke 1987), where a town is represented with a roof, a road and two facing walls with characteristics playing a key role in the town energy budget. More especially, the model accounts for the trapping of a fraction of the incoming solar and infrared radiation by the canyon.

The exchanges of energy between water surfaces and the atmosphere can be treated in a very simple way or by using more physically based but complex model. There are two possibilities to compute fluxes over marine surfaces. The simplest one consists in using Charnock’s approach to compute the roughness length and fluxes with a constant water surface temperature during the simulation period. The other method consists in using a one-dimensional ocean mixing layer model in order to simulate more accurately the time evolution of the sea surface temperature and the fluxes at the sea/air interface. This model based on Gaspar (1990), is very helpful especially at mesoscale to represent diurnal cycle of SST (Lebeaupin 2006).

A better restitution of surface temperature and consequently of the associated surface fluxes are also the main improvements obtained by the use of FLake model. FLake is based on a two-layer parametric representation of the evolving temperature profile and on the integral budgets of heat and kinetic energy for the two layers.