HyMeX aims at a better understanding and quantification of the hydrological cycle and related processes in the Mediterranean, with emphasis on high-impact weather events.

The HyMeX programme aims to:

improve our understanding of the water cycle, with emphasis on extreme events, by monitoring and modelling the Mediterranean atmosphere-land-ocean coupled system, its variability from the event to the seasonal and interannual scales, and its characteristics over one decade (2010-2020) in the context of global change,

assess the social and economic vulnerability to extreme events and adaptation capacity.

In particular, HyMeX aims to improve knowledge and forecasting of hydrometeorological risks (Mediterranean Heavy precipitation and flash-flooding events, drought) in the Mediterranean. In France, HyMeX is a component of the multi-agency MISTRALS project launched for 10 years in 2010.

The progress made in terms of knowledge and modelling of Mediterranean hydrometeorological phenomena in the first phase of the programme, as well as the multidisciplinary framework provided by HyMeX, made it possible to orient the second phase of the project towards issues that go across several scientific fields, such as integrated prediction of heavy rainfall to impacts or the consideration of anthropogenic effects (irrigation/dams) in the modelling of the continental hydrological cycle and water resources in which the CNRM is strongly involved.

The five scientific Topics of HyMeX: 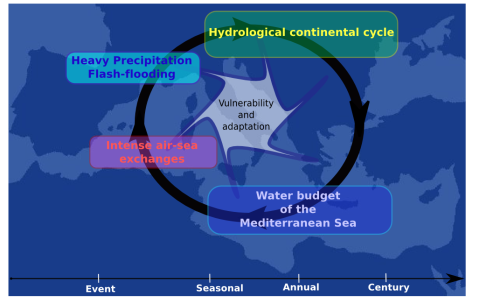 A multi-disciplinary (oceanic, atmospheric, hydrological and social sciences) and seamless (from climate to event scales) approach is developed for both observation and modeling set-up. It relies on a three level nested observation scheme associated with the corresponding modeling systems and social analyses:

A Long Observation Period (LOP) (2010-2020) provides observations and regional climate simulations of the whole Mediterranean coupled system in order to perform water budget and analyze the seasonal-to-interannual variability of the water cycle. Observations of the LOP mainly relies on networking of existing operational observing systems and observatories in hydrology, oceanography and meteorology. Within the framework of the LOP, hydrological and sociological surveys are also organized after major flash flood events.

Enhanced Observation Periods (EOP) is set-up for both budget and process studies, based on enhancement of existing research observatories and operational observation networks in specific Mediterranean areas. The first one takes place over northestern Mediterranean (France) from 2012 to 2015. Hydrometeorological observations were performed each autumn over the Gard and Ardèche watersheds to document flash-flood events. Also, a EOP took place over the year 2012-2013 in order to document a complete cycle of dense water formation in the Gulf of Lion. An EOP from spring to summer 2020 is planned to describe a complete growing vegetation cycle as part of the LIAISE campaign on soil-vegetation-atmosphere exchanges in semi-arid regions. An EOP is also underway (2018-2020) on ocean circulation in the Levantine Basin, in collaboration with MISTRALS’ MERMEX program.

Special Observation Periods (SOP) of several months provide detailed and specific observations to study key processes of the water cycle. SOP1 and SOP2 were organized in 2012 and 2013 in northwestern Mediterrananean. Dedicated ground-based, ship-borne, balloon-borne and airborne means were deployed during the SOPs in addition to the EOP observational framework.

CNRM coordinates the HyMeX programme, including including the two field campaigns in 2012 and 2013 in northwestern Mediterranean and the LIAISE field campaign foressen in 2020 in Spain. CNRM researchers coordinate MISTRALS/HyMeX and several associated ANR projects MEDUP, ASICS-MED, MUSIC, HILIAISE as well as the MEDCORDEX joint action.

CNRM research has led to significant advances in terms of knowledge and modelling on HyMeX’s scientific themes. HyMeX data were used at the CNRM to, among other things, advance knowledge of Mediterranean heavy precipitation events, intense air-sea flows and ocean convection, improve AROME and ALADIN-climate models, assimilate new observations, evaluate the AROME ensemble forecast, validate the coupled AROME-NEMO-WW3 and CNRM-RCSM systems in the Mediterranean.

More than 450 articles have been published in international scientific journals since the launch of the HyMeX program, including more than 100 articles co-authored by at least one CNRM researcher.

Five special issues in A-rank scientific journals are dedicated to the presentation of HyMeX results, including 3 coordinated by CNRM researchers.

HyMeX is supported by CNRS, Météo-France, CNES, IRSTEA, INRA through the multidiscplinary metaprogram MISTRALS (Mediterranean Integrated STudies at Regional And Local Scales) dedicated to the understanding of the Mediterranean Basin environmental process.

The following research laboratories and Institutions contribute or have contributed to HyMeX:

in The Netherlands: Universities of Delft and Wageningen,

in Greece: National Observatory of Athens, University of Athens

in Croatia: DHMZ, Univetrsity of Zagreb, Split Institute of Oceanography and Fisheries

in Serbia: Univ of Belgrade

in Turkey: University of Istanbul

and by the following European agencies: EUMETNET, EUCLID, EUMETSAT.