Cities bring together 50% of the world population, and this share exceeds 80% in developed countries. Moreover, urban areas concentrate the vast majority of capital stock (housing, water delivery and transportation infrastructures). Clearly, such population concentrations give rise to social, economic, and environmental concerns.

Among these issues, urban areas are subject to specific micro-climates, as the city affects the wind pattern, alters near-surface humidity, changes the frequency of fog events and enhances convective clouds downwind of cities, and atmospheric turbulence. The most strinking feature of urban climate is the Urban Heat Island (UHI). 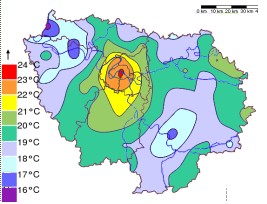 This phenomenon, whereby air temperature is often higher downtown in comparison with the outskirts (which are themselves warmer than the surrounding countryside), was first observed by Luke Howard (1820) over the city of London. Nowadays, the temperature difference can reach up to ten degrees for large agglomerations and can strongly enhance heat stress, especially at night, during heat waves, and lead to serious consequences in terms of public health.

This was the case in 2003 when a strong heat wave affected Europe and caused more than 70 000 casualties, with a higher percentage of victims in urban areas (see figure : 2003 Heat wave : nocturnal heat Island measured in Paris - average of 15 consecutive nights)