By using appropriate 3D image analysis algorithms on tomographic data, it is possible to simulate diverse physical and mechanical mechanisms. Some models are presented below.

Snow, from its fall until its full melting, undergoes a structural metamorphism governed by local temperature and humidity fields. Among them, the isothermal metamorphism seems the most accessible to modeling. In this work, we tried to simulate the microstructural transformations of a dry snow sample, placed in isothermal conditions, near 0 degree C. In these conditions, the vapor pressure of water is high : the metamorphism can be considered, in first approximation, as fully curvature-driven. A simple numerical model was implemented on this basis and applied to simulated data and 3D images from X-ray microtomography.

This simple physical model, which is based on Kelvin and Langmuir-Knudsen equations, takes into account the variation of the saturating vapor pressure with temperature by using the Clausius-Clapeyron equation. It can determine locally whether the ice is condensing or sublimating, just depending on both the temperatures in the snow matrix and the local mean curvatures of the ice/pore interface. This model can also explain the formation of facets that occurs during the metamorphism. Thanks to X-ray microtomographic images of snow samples obtained under different temperature gradient conditions, the validity of this model can be verified.

Snow, when placed in isothermal conditions and at negative temperature, transforms into a brittle material consisting of small rounded shapes that are typical from microstructures commonly obtained during the sintering of ceramics.

This metamorphism is classically considered as limited by the water vapor diffusion that occurs in the pore space of the snow structure. In order to validate this hypothesis, the water vapor field in small snow samples has been modeled from tri-dimensional images obtained by X-ray microtomography. 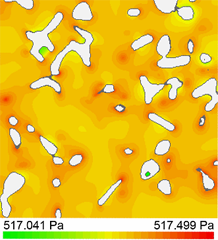 Thanks to previously developed algorithms, the curvature field is first estimated at the air-ice interface. By using the Kelvin’s equation, one cane define the vapor pressure conditions very close to the interface. Then, the diffusion equation is numerically solved with an iterative method, which provides, after convergence, the water vapor field in the pore space. The local vapor gradient, which is estimated close to the interface, yields the growth rate in each point of the interface.

The obtained results allow to assess the water vapor diffusion as a possible limiting mechanism for the isothermal metamorphism. However, it does not invalidate other mechanisms that could happen in snow, such as surface reaction phenomena or growth at grain boundaries.

This model, which could be used to simulate the time evolution of small snow structures, consists in a first step toward precise comparisons between different mechanisms. 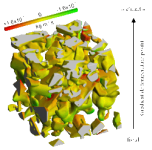 A simple physical model describing the temperature-gradient metamorphism of snow is presented. This model, based on Kelvin’s equation and Fick’s law, takes into account the local variation of the saturating vapour pressure with temperature. It can determine locally whether the ice is condensing or subliming, depending on both the pressure and temperature fields in the snow structure. This model can also explain the formation of facets that occurs during the metamorphism. Using X-ray microtomographic images of snow samples obtained under low to moderate temperature-gradient conditions, this model has been tested and compared to the reaction-limited model proposed in a previous work.

Snow is a complex material that continuously transforms with time. Its metamorphism strongly impacts its physical and mechanical properties. Thermodynamics is the main cause of the metamorphism but mechanical solicitations also modify the geometry of the ice matrix, and thus influences its thermodynamics. As a consequence, modeling the metamorphism of snow at micro-scale often require to account for internal mechanical effects in the snow sample.

As a first attempt in this direction, we addressed the settling of dry snow samples submitted to isothermal conditions. A previously developed model showed that just accounting for the internal vapor exchanges using the Kelvin’s law leads to numerous neck disconnections at the beginning of the metamorphism. We propose a new 3D numerical model that accounts for basic mechanical laws to reorganize the disconnected grains into the snow structure.

The modeled results are compared to images series obtained from experiments of isothermal metamorphism by X-ray absorption tomography. Our numerical model gives realistic explanations about the commonly observed rapid densification of snow under isothermal conditions. It is also a promising tool to study snow metamorphism as it provides a means to simulate the first steps of the snow densification process under isothermal conditions.