Some experimental techniques used by our team are presented hereafter.

Synchrotron radiation, which produces an intensive and perfectly collimated X-ray beam, is particularly adapted to the study of the snow microstructure : It gives high resolution images (4 to 10 micrometers per voxel) in a short scanning time (some tens of minutes at ESRF ID19 beamline).

Common radiation sources as used in conical tomography are also suited to snow imaging : high resolution images (7 micrometers per voxel) were recently obtained after 2 hours with the microtomograph of the 3S-R Laboratory.

Of course, the use of a cryogenic cell is required to prevent the sample from melting during the image acquisition process. For fragile snow, the samples need to be first strengthened with a liquid chemical poured into the pores, and then frozen. 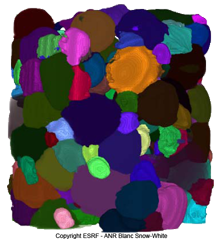 DCT is a non-destructive, 3D characterization technique for polycrystalline materials that has been recently developed at the ESRF. By combining X-ray absorption and diffraction imaging, it reveals simultaneously the microstructure of the specimen in terms of grain shape and geometry of the porosity, as well as the crystallographic orientation of individual grains.

Diffraction Contrast Tomography has been recently used to study snow deformation at the grain scale. The DCT provides the crystalline grain orientations, which are essential since ice exhibits a very strong anisotropic behavior in the visco-plastic regime. 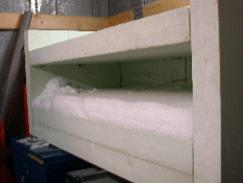 A 3 months long experiment of isothermal metamorphism at -2 degree C was run at Col de Porte, French Alps, in order to provide precise microtomographic 3D data for the validation of metamorphism models.

After applying appropriate geometrical analysis tools, the evolutions of porosity, specific surface area, anisotropy and curvature distributions have been obtained, showing a correct description of the well known behavior of an aging snow layer. These measurements provide quantitative data for the validation of metamorphism models and other interesting prospects for improving models and understanding the physical phenomena that happen in snow microstructure.

Thanks to X-ray microtomographic images of snow samples obtained under different temperature gradient conditions, it is possible to access important 3D geometrical information such as the curvature field or the specific surface area of the considered samples. These measurements provide quantitative data, allowing a better understanding of the metamorphism processes.


CellDyM : a cryo-cell for time-lapse tomography at room temperature 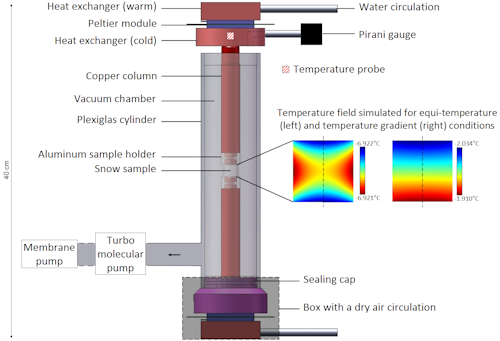 Monitoring the time evolution of snow microstructure in 3-D is crucial for a better understanding of snow metamorphism. We, therefore, designed a cryogenic cell (CellDyM) that precisely controls the experimental conditions of a sample while it is scanned by X-ray tomography. Based on a thermoelectrical regulation and a vacuum insulation, the cell operates at room temperature. It is, thus, adaptable to diverse scanners, offering advantages in terms of imaging techniques, resolution, and speed.

Three-dimensional time-lapse series were obtained under equitemperature and temperature gradient conditions at a 7.8 μm precision. The typical features of each metamorphism and the anisotropic faceting behavior between the basal and prismatic planes, known to occur close to −2°C, were observed. These results are consistent with the temperature fields expected from heat conduction simulations through the cell. Observable in less than 30 h, they confirm the cell’s accuracy and the interest of relatively short periods to study snow metamorphism.